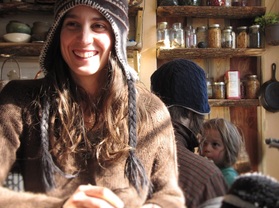 Ella
While growing up in the suburbs of New Jersey, Ella felt she was born into the wrong time. Career orientation in a world that felt fake and superficial was a difficult concept to get behind. She didn’t want to grow up because she felt there was nothing to grow up to. She did love sitting on the beach, or at the top of a mountain looking down at the ocean, or in a kayak on a still lake with only the loons for company, or behind the great tulip poplar tree in her yard planting one lone flower, but this all seemed to be reserved for vacations, or childhood wonder, not for a livelihood.
So when Ella met others who were not trying to become public school teachers or bankers or drug dealers or academics, whose daily life was entwined with the earth and not in a cubicle or behind a desk, the depression of being born into the wrong time (really culture) began to fade. She met people who knew how to harvest wild food from the land, how to chop firewood and build their own shelters, how to grow food and herbs and medicine. All of a sudden, life felt real, like waking up from a dream you’ve been dreaming your whole life.
Community came next. As an answer for the loneliness of the nuclear family. As an answer for how to undertake more self sufficiency. As an answer for not just reducing our environmental footprint but for making a positive impact. But mostly, what felt natural, right. What felt like the way human beings were meant to live.
Always searching for deeper meaning, Ella began three months of residential training in Great Vow Zen Monastery in 2010. Within this community of monks and lay people, all with a formal intention to maintain their vows, she learned to drop previous conceptions of herself and move into an open sense of self, with self-discipline, a commitment to creating good, right livelihood, and following intentions. She maintains a spiritual practice of zazen with varying degrees of practice.
After leaving the monastery, Ella then moved to CRICHouse community in California, hoping to learn what it means to be human. She lived here for a year and a half, learning building, forestry, butchering, goat milking, cooking, food preservation, and how to manage (or not manage) group dynamics, until she and her partner Gil decided to begin a new project. This was a human scale, off grid, natural built village in the forest, Woodrat Community. In 2012, while building the village they also gave birth to a child, Avni. He was born at home in their house with redwood bark roof and raw wool in the walls, and with four midwives to welcome him. She lived here for three years, expanding her skills in homesteading and community living, and becoming a woodworker by trade.
Ella moved with Gil and Avni to Virginia in early 2015 to form connections with the Louisa egalitarian communities of Twin Oaks, Acorn, Sapling, and Living Energy Farm. At Cambia, she is able to maintain a small, close knit community, learning a lot about how to make relationships work, how to form trust, share income, and support each other. She is here to grow emotionally and spiritually, to begin to have a deep connection with the land, to increase homesteading and self sufficiency skills, to learn more about permaculture, and to continue her woodworking and crafting livelihood with others in the context of community.
​ 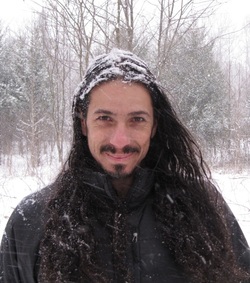 ​Gil
sometimes I wonder if a mere perceptual deficit of mine had led me to construct elaborate theories of what’s wrong with this world and how to fix it. like a man who needs glasses, but instead keeps trying to create find a place with greater clarity and focus. I’ve met lots of people who don’t doubt the world is full of injustice and misery and might end soon, but they feel about as upset by it as I do when I hear about how the red sox might not be in the NFL this year or something complicated like that. and why don’t I? obviously the red sox are featured in the news more than the desertification in northern india. and obviously there are a lot of deep emotions wrapped up in it.

well I have a better question than that: if I’m so concerned about misery why am I not interested in supporting research on brain stimulation or genetic enhancement that could free humans of their condition? that’s a really good question. I have an answer for it but the answer is rarely as good as the question so I’m not going to answer it yet.
ok, I was going to write about myself. I think I have a perceptual deficit and I can’t perceive meaning and significance out of mere conformity. which believe it or not, has made me interested in collectivism rather than individualism. I’ve always felt a strange degree of identification with the one dude in “Life of Brian” who refused to yell with everyone: “we are all different!” instead said “I’m not” and got shushed by the crowd.
Oh no, I’m being told I’m not doing a good job writing about myself. so I’ll try again:
I like to cook, I don’t like to build things, I’m really bad at it, but I’ve always done a lot of construction because I like planning structures and have a lot of ideas so I’m compelled to put my poor skills into work.
let’s see what else do I not like to do: reading. I’m sooooo bad at reading and writing, but I do quite a bit of it, someday google would do a sufficiently good job reading everything to me and writing what I say.
I’m avoiding the question! I have a passionate aesthetic vision for community. which is very different than what is modernly adored or at least done in modern houses, but somehow is not very different in essence from what’s in the romantic-nostalgic-realist oil painting that hang inside these sheet-rock monsters. is the contrast part of the aesthetic? don’t know. so I spend a lot of time envisioning creating cuteness in the landscape. I have in the past been awarded very honorary compliments from a big-shot architect who came to see my work. the architect happened to be my mom, but I’m sure she was at least partly honest.
yes, right, I’m here at cambia to build an awesome playground in the forest! it will take a couple of years but I’m excited. also to create seasonal solar-thermal water storage experiment that would be fun to play in.
I’m also working on starting a research institute to study intentional communities, why they succeed and why they fail. mostly why they fail I suppose… there’s much more data about that.

Jason
Jason embodies the quote “Do what you love and you’ll never work a day in your life.”  Although he's an incredibly hard worker, he finds a way to bring joy into all the things he makes.  And, oh, he makes all the things.  Some of his things float, some make music, some light up.  Some make decisions.  Some, we eat!  Jason designs beautiful spaces; he's our ambiance master.  Jason also made Anthony; Anthony mostly makes chaos.

Jason’s world revolves around his son.  He finds jobs that allow them to spend time together while simultaneously engaging in skilled design and craftsmanship.  Jason puts the same careful consideration into his friends and family as he does his work products.  His professional resume includes his love for “camping under the stars by a warm fire" and “spending time with my beautiful and wildly creative son Anthony.”

To find Jason around Cambia, follow the sounds of ukulele strumming or of power tools; he's notorious for fixing up (and safetying up!) things around Cambia. Anthony feels it necessary to mention his perfectly or awfully-timed (depending on who you ask) dad jokes, which he will be sure to laugh at, even if no one else does.  He finds joy in little things, like dead-nettle flowers and ducklings' peeps.  You'll recognize Jason by his pale blue eyes, sweet crooked smile and calloused hands.  Jason brings a stable and cheesy dad energy to Cambia, with intermittent spontaneous and infectious joy.

Bruce
is an ethicist who answered his question, a hitchhiker who put down roots, and a big bald guy in a colorful sarong.

Bruce cares about ethics.  He studied philosophy on and off for years, at school and alone, hitchhiking around the country during off semesters.  The street and woods were laboratories of right action.  He's an aretaic turn ethicist; in his case, that means he cares about particular relationships and stories.  He did theory work for many years, but for the last two he's been more interested in putting what he learned into practice.  He doesn't care to convert, but can give some pretty unusual advice.

Bruce cares about egalitarian community.  Capitalism seems to offer a variety of life choices ranging from being exploited by others to exploiting others, so he's doing his best to avoid capitalism.  He's spent time at several very different intentional communities.  You may have heard of Ganas or East Wind; you won't have heard of the others.  He's in community to form meaningful relationships with places and people, and to work in honor of those relationships.  He's at Cambia because we make it so easy to do just that. 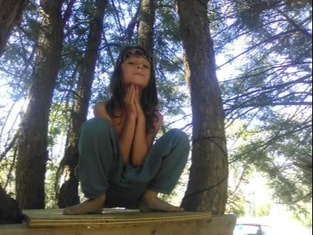 Avni
Avni has lived at Cambia for almost his whole life.  He knows all the best mossy rocks in the forest and can identify more plants than most of us.  His unorthodox lego creations impress visitors; his emotional literacy impresses everyone.